When working in Loreshelf some notebooks require different configurations than others. Sometimes it's more practical to add new notecards to the top and sometimes it's faster to let Loreshelf order the notecards by title. Loreshelf 1.5 enables to configure each notebook separately when the default setting is not enough. I also fixed an important async issue when the last remember option didn't update in some situations. If you run on Win/Linux you may upgrade inside your app automatically through the notifications or using the menu. Mac users may install Loreshelf 1.5 here.

Placement of a newly added notecard

Set where a new notecard should be placed, at bottom or top, in each notebook.

Set how notecards should be sorted, by title or custom, in each notebook. Sorting by title is done automatically when a notebook is opened and a notecard is renamed.

Open a notebook in zen mode

A notebook can be set to collapse notecards when opened. This is useful when there is a lot of notecards and we are usually interested only in content of few notecards.

This version includes many small improvements and fixes making its daily use more satisfying. If you run on Win/Linux you may upgrade inside your app automatically through the notifications or using the menu. Mac users may install Loreshelf 1.4 here.

Documentation is now available online. It includes the same in-app information. Loreshelf notebooks were used as an input for mkdocs tool which generated the html documentation site.

Aside the improvements below: Opening and closing an image is much faster. Fixed removal of tables and forms. Fixed copy of an icon which included spaces. CTRL+A selects all content within a block, repeat to add more. Optimized url of local images in workspaces with spaces (both versions work), and few more..

Enable global app key shortcut to gain focus in Loreshelf anywhere or keep the Loreshelf window always above all other apps.

Download link info from weblinks automatically, enlarge an image using a zoom button, display a link as an icon and hover a link to see its destination url.

The highlighted new feature of this release is fulltext fuzzy search. A few minor issues were fixed. If you run on Win/Linux you may upgrade inside your app automatically through the notifications or using the menu. Mac users may install Loreshelf 1.3 here. 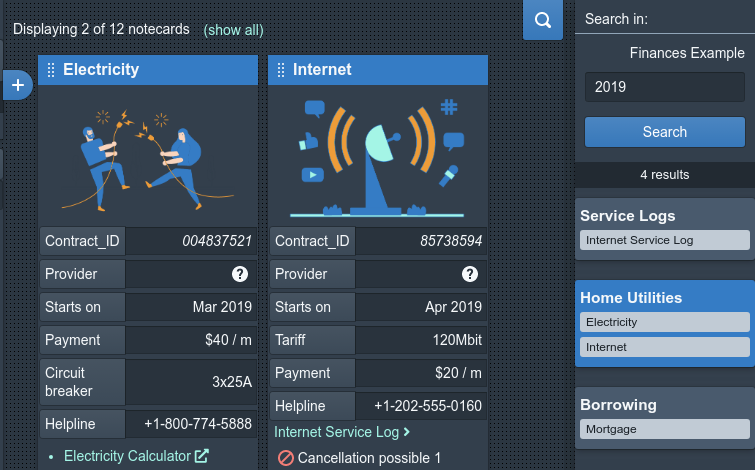 Find notebooks and notecards which contain similar or exact text.

By default Loreshelf opens the last opened notebook. You may reset the behaviour to open the last notebook in the Preferences.

Down arrow key in a table or a form moves the cursor within the same column now. Right click on a paragraph will open the context menu to copy, cut, and paste the text.

This release fixes few serious issues such as remembering last opened workspaces, sorting, filtering, drag and drop notecards on the background, and improves export to PDF. If you run on Win/Linux you may upgrade inside your app automatically through the notifications or using the menu. Mac users may install Loreshelf 1.2 here.

The elements should better represent their function in minimalistic way.

Fixed sorting and filtering of notebooks.

This release includes minor updates that are fully backward compatible. If you run on Win/Linux you may upgrade inside your app automatically through the notifications or using the menu. Mac users may install Loreshelf 1.1 here.

A click on the check icon will change its state.

Open the in-app documentation quickly from the menu. 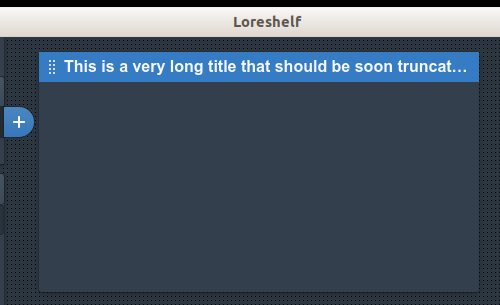 Notecard headers cut off too early

The truncation now happens exactly at the end of notecard header.

This is the initial release of Loreshelf. 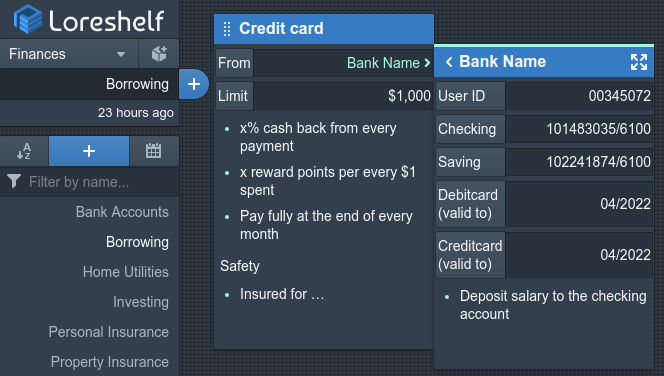 Mention and link to the related information across notebooks and workspaces. 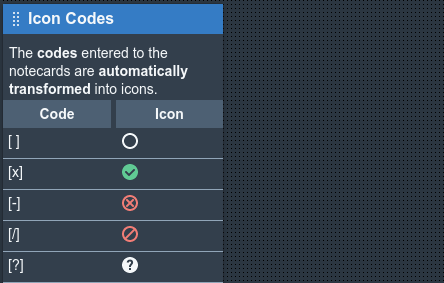 Quickly enter icons to present the state of things. 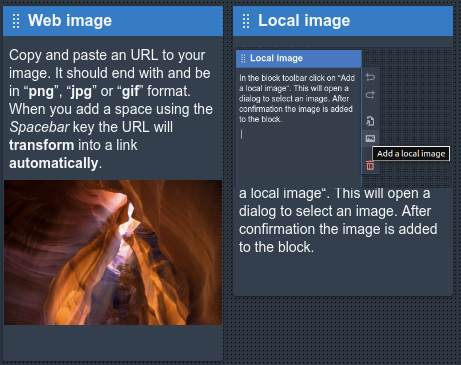 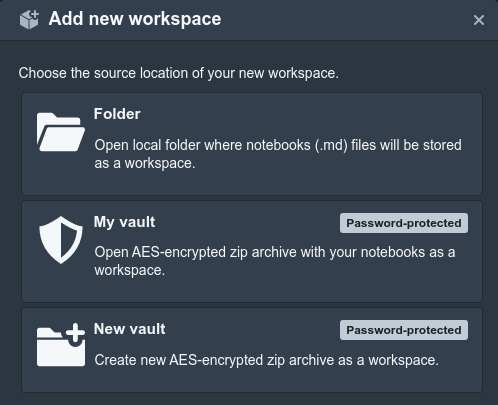 Lock and encrypt your notebook as a password-protected zip archive that can be shared and opened without Loreshelf.